One of the most common questions we get is, “what is the OAL for the _____ bullet?”  Often it’s prefaced by, “I loaded these at the same length as brand X or a factory round and they don’t chamber.”   It’s important to realize that each bullet mold manufacturer can have slight differences which will change the way the loaded round interacts with the chamber.  Also especially in 9mm, chambers and bores tend to vary from firearm to firearm.

For the descriptive purposes of this article, I am using the term “ogive” to refer to the area of the bullet that contacts the barrel leade or throat first.  This is a limiting factor to OAL and must be taken into consideration.

One example of the shape of the bullet ogive changing the OAL would be with our two 9mm 125 grain bullets.  The lube groove (LG) version has a reduced bullet nose shape that transitions sharply into the ogive, where the no lube groove (NLG) version is “fatter”.  The LG bullet can be loaded much longer than the NLG bullet. 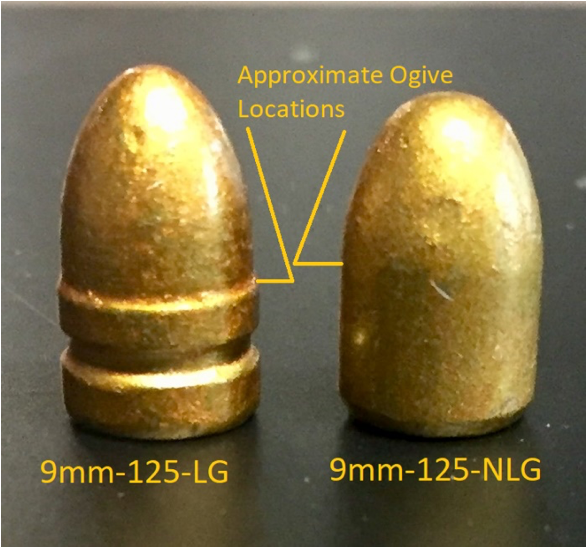 The plunk test is a great way to determine the maximum length of a loaded round for your barrel.  The term “plunk” refers to the sound a bullet makes when dropped into a chamber.  It should fall and bottom out on the rim or case mouth and there is a distinctive sound made when brass bottoms out on steel.  To perform the plunk test do the following:

Magazine length is also a consideration.   Years ago I learned this the hard way.  I switched from one brand of 45-185 JHP to another and didn’t change my dies.  Got to the match and they wouldn’t load into my 1911 magazine!    So the last step is to check the magazines you’ll be using to make sure they fit.

Use published data for coated lead bullets or lead bullets of similar grain weight to determine a starting load.  Keep in mind that as a bullet is seated deeper, the case volume is reduced so pressure will increase.  Start on the low end of published data and gradually work up to get the performance that is desired.

We hope that this information will be helpful as you load and shoot Brazos Bullets!